This is the resurrected world. Things are inward-out here and principles may be experienced independent of forms, just as the soul in the hereafter is more tangible than the body. 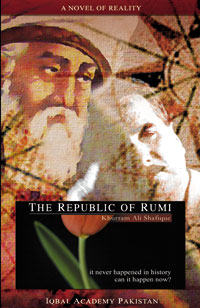 Excerpted with permission from
The Republic of Rumi:
A Novel of Reality
By Khurram Ali Shafique
Iqbal Academy Pakistan, Lahore
306pp. Rs150

It was night when Khizr appeared. Now it’s daybreak. ‘You should foretell a bright morning when the stars begin to dim,’ a voice is now addressing the Poet. It may or may not be Khizr’s. ‘The sun has appeared on the horizon. Lifeblood is coursing again in the dead veins of the East. Avicenna and Farabi cannot understand how!’

The phoenix has risen. The prophecy fulfilled itself. It’s the same day, but a new morning. ‘The Muslim became Islamised by the tempest of the West. Roughness of the river feeds the pearl. The Divine Grace is about to bestow again on the Believer the magnificence of the Turk, the intellect of the Indian and the speech of the Arab.’

Connection between the roughness of the waters and the growth of pearls is an obscure analogy but you may notice the emphasis on principles rather than personifications. The focus here is not the Turk, the Indian or the Arab but the magnificence, intellect and speech typically attributed to them.

‘O nightingale!’ The voice addresses the Poet again. ‘Why should a discerning eye look at the armour of the horse when it can see the warrior’s valour itself!’

This is the resurrected world. Things are inward-out here and principles may be experienced independent of forms, just as the soul in the Hereafter is more tangible than the body. Thus principles are coming to be known before their applications could be seen. Connection between pearl and tempest is not obscure if you stop thinking in terms of underlying principles and readjust yourself to overlying principles.

‘The morning breeze creates its companion for the road out of the perfume of the rose and so our debonair stole away the hearts of Tabriz and Kabul. Grieve not over what the Ottomans had to undergo, for it takes the blood of a thousand stars to make a daybreak appear.’ It is very much the tone of Khizr.

The heart of Tabriz means Sufism as Rumi’s mentor came from that city. The heart of Kabul is kingdom since the Poet has dedicated a book to the King of Afghanistan. The debonair is none other than Mustafa Kemal. It seems that he defended his country against the Allied but also restrained himself from prolonging a war once the defence was secured.

‘O nightingale!’ The voice addresses the Poet. ‘You have been carrying the secret of life in your breast, say it now.’

The Poet rises to deliver his address. ‘You are the hand and the voice of the Eternal God, O negligent one!’, he says. ‘Acquire certainty, for you have given away to doubt. Space is temporal, creation is mortal but you have eternity to yourself since you are the gift prophethood took with it from here to the Hereafter.’ Carefully choosing his words, he is turning principles into concrete realities.

‘It is evident from the story of the People of Illumination that you are the defender of all Asian nations,’ he says. ‘Read again the lessons of truthfulness, justice and courage, and you will be chosen to lead the world.’ The references are unmistakably to Siddique, Farooq and Hyder but only their principles are mentioned here.

‘The decree of Nature as well as the hidden meaning of being a Muslim is nothing but universal brotherhood and abundance of love,’ he adds.

The catastrophe that brought down the old world and created you from the ashes of civilisation was the larger picture. The annihilation of the Muslim world, which you witnessed as if from the inside, was a detail. The Poet could not have given you an insider’s view without bringing you to the corner where he belongs and without an insider’s view you may have had information but not this first hand observation.

‘That which extirpated the tyranny of Caesar and Chosroes, what was it? The strength of Hyder, the poverty of Abu Dhar and the truthfulness of Salman the Persian!’ You may notice that the lion ‘reawakened’ will also be a lion resurrected: inward-out. In other words, the principles of a lion are separable from the entity itself. Hyder, Abu Dhar and Salman belong to history but their principles will never die. I seek that which is unattainable, the Shaykh had said in the verses of Rumi.

‘See how the Turk has sustained longer even than the German: neither swords nor schemes can ensure freedom from bondage but chains give way if a taste for certainty is acquired. Who can judge the strength of a true believer’s arm when a look from such a person is enough to change destinies?’

The Allied had been beating the Ottomans but were easily put down once the Turks changed their own perspective on the situation.

‘The reality is ultimately the same whether something is made of earth or made of light. The blood of the sun will come out if we were to incise the heart of an atom. Firm certainty, resolute action and universal love — in the holy war of life, these are the swords for those who dare. What else may a daring one require except a lofty spirit, pure character, warmth of heart, penetrating vision and a restless soul!’

The dualities of war and love, kingdom and Sufism were irreconcilable as long as appearances were inseparable from principles. In a world where principles themselves are crystallised, will it be possible to reduce the opposites? The days of armed conflict are not entirely over yet, but principles are becoming so concrete that steel may look outdated one day.

‘Those who had leapt with the splendour of a falcon turned out to be lacking in wings and feathers! Those scrambling underwater received watery graves while those who were being thrashed about by the waves came out as pearls. Our slow-paced messenger brought the message of life. Those who had the lightning itself for their informant have come out to be unaware.’

Things are happening in reverse, just as they happened when Joseph came out of the prison. The slow-paced messenger is you. A slow-paced messenger arrives late, and you entered the Garden later than all other characters. Yet, you are the one who has brought real life here.

You are the protagonist of the narrative.

What ever else ‘The Dawn of Islam’ maybe, it is also an open air Parliament House dedicated to spiritual democracy. You are presiding over the current session jointly with Mustafa Kemal.

You haven’t been asked any question about your religion: your success in arriving here by following the principle of non-contradiction is what makes you a member.

‘Islam earned a bad name due to the short-sightedness of the Old Man of the Sanctuary,’ the Poet says. ‘But how farsighted the young Turks have come out to be! Conviction in individuals is all the capital needed for building a nation; this is the force which shapes a nation’s destiny.’ He has offered a compliment to Mustafa Kemal but ironically it also underlines the strain in the young leader’s relationship with the diseased heart of the Muslim world itself.

The Poet now turns to you. ‘You are the mystery of creation, be revealed to yourself. Become a confidante to the self, an interpreter of God. Greed has disrupted the unity of the human race. Become an illustration of brotherhood, a spokesperson for love. They call themselves Indians, Asians, Afghans and Turks — why become so dependent on shores, take a big leap to become boundless! Immerse in the self, O negligent one, it is the secret of life. Transcend the spell of time and become eternal. Be like steel in the struggle of life and be silk and velvet in the chamber of love. There is no limit to your knowledge and love. In the instrument of nature no other song is more than you.’ Nature is the Garden while you are the protagonist itself.

Now he brings forth the mission statement of spiritual democracy. ‘Humanity is still a fallen victim before imperialism,’ he says. ‘What a pity that human beings should prey upon each other. The glitter of the present civilisation confounds the sight but this artistry is a display of fake jewels. The science in which the sages of the West used to take pride is a bloodthirsty sword in the ruthless hand of greed, for the charm of reason cannot bring permanence to a culture that is based on exploitation. Deeds turn life into paradise as well as hell, for the human being is made of dust and by nature is neither light nor fire.

‘Untie the knots on the flowers and inspire the nightingales to fall in love, for you are the draught of spring to this garden. The spark of love has risen again from the heart of Asia: the land is teeming with green-uniformed Turks!’

You are the draught of spring because things are opening up with each knot you untie and the most recent opening has brought forth the Turks of Mustafa Kemal, all clad in green, like a host of trees to bedeck the Garden.

Wine extracted from the verses of Hafiz is being brought for the gathering (and you may recall the effect it used to have on Goethe). It is the official drink in the Parliament of Spiritual Democracy. However, before you could take a sip, the Poet says something that could make you forget even the wine of Hafiz.

‘Come, a caravan has arrived at the well where Joseph was hidden. Someone is there to buy the poor soul.’